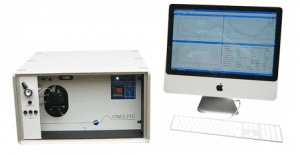 AMGEN researchers published their first results using OWLS 210 for studying Poloxamer/ Polysorbate adsorption. Their resarch was published in April 2014 in the Journal of Pharmaceutical Sciences.

Poloxamer 188 (BASF Pluronic® F68) is widely used as a shear-protective excipient to enhance cell yield in agitated cultures and reduce cell adhesion in stationary cultures. However, little is known in any quantitative sense of its effect on protein adsorption and aggregation. Optical waveguide lightmode spectroscopy was used here to compare the adsorption kinetics exhibited by poloxamer 188, and polysorbates 80 and 20, in the presence and absence of a model protein (chicken egg white lysozyme) and in separate experiments, a recombinant protein (human granulocyte colony-stimulating factor) at hydrophilic, silica–titania surfaces. Experiments were performed in sequential and competitive adsorption modes, enabling the adsorption kinetic patterns to be interpreted in a fashion revealing the dominant mode of surfactant-mediated stabilization of protein in each case. Kinetic results showed that polysorbates 80 and 20 are able to inhibit protein adsorption only by their preferential location at an interface to which they show sufficient affinity, and not by formation of less surface active, protein–surfactant complexes. On the other hand, poloxamer 188 is able to inhibit protein adsorption by entering into formation of protein–surfactant complexes of low adsorption affinity (i.e., high colloidal stability), and not by its preferential location at the interface. © 2014 Wiley Periodicals, Inc. and the American Pharmacists Association J Pharm Sci 103:1043–1049, 2014